We were delighted to work with the Peritoneal Malignancy Institute Basingstoke to deliver the EuroPMP International workshop on Pseudomyxoma Peritonei  (PMP). This meeting was part of the EuroPMP COST Action. We welcomed specialists from around the world, including: Germany, Spain, Sweden and the US, to discuss the latest developments in the management of pseudomyxoma peritonei (PMP) and there was a great buzz of discussion.

Professor Heald received the award from the Swedish Ambassador to the UK, Mikaela Kumlin Granit, at the Swedish Embassy on 29 April 2022. The Ambassador referred to Professor Heald’s tireless work with the Swedish medical community which led to improvements in the treatment of cancer, improved patient care and improved survival rates, not only in Sweden but across the world. She summarised his remarkable career, including having been a vice-President of the Royal College of Surgeons in England, as well as his development of the pioneering surgical technique, total mesorectal excision (TME), which has become the gold standard for lower rectal cancer removal. The Ambassador praised Professor Heald for promoting cooperation between Sweden and the UK with the noble aim of alleviating human suffering.

A Pelican supported research study COALS, was presented at the Upper Gastrointestinal Congress in Belfast in October 2021 by Ms Walsh, who won the UGI Congress Oral Presentation Prize for the best presentation in the Liver Free Paper Session.

Ms Walsh was delighted to go on to present the work further afield at the 15th IHPBA World Congress 2022. This conference was organised by the International Hepato-Pancreato-Biliary Association and was held in New York, USA, between 30 March – 2 April 2022.

COALS was investigating coagulation in liver surgery. Its specific focus was to understand the changes in coagulation ​(blood clotting) that occur before, during and immediately after liver surgery for colorectal metastases​ (secondary bowel cancer). ​Blood loss is a major risk when operating on the liver so understanding how to reduce that risk is vital to improving patients’ survival and recovery from this type of surgery.

Presenting the studies significant findings on an international scale, is hoped to add weight to the growing field of evidence supporting a global change in practice amongst liver surgeons to improve patient ​outcomes.

Pelican was able to hold its first in-person event since the pandemic started, our annual Basingstoke Colorectal Symposium. The attendees really enjoyed the event and we heard from some great speakers talking about their research that had been funded by Pelican. This event demonstrated how important it is for us to continue our research and education programmes to improve the treatment of bowel cancer.

It was a joy to be able to revive the traditional ‘attendees on the stairs’ photograph. 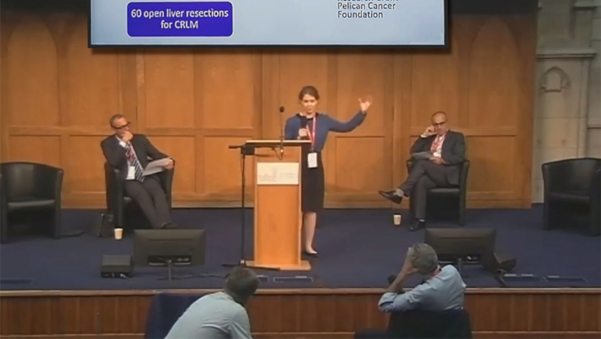 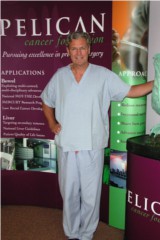