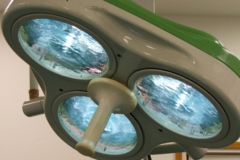 Basingstoke and North Hampshire Hospital is one of only two national specialist centres in the country treating this disease. It has subsequently become the largest volume centre in the world. The centre forms part of the colorectal unit, and has built upon the expertise of this unit in the management of complex rectal cancer surgery.